Do not let your kid tangled up in this hollow world and its stupid stereotype about a specific person, community, group, or race. Break the chain and aware your kid about unconscious bias. 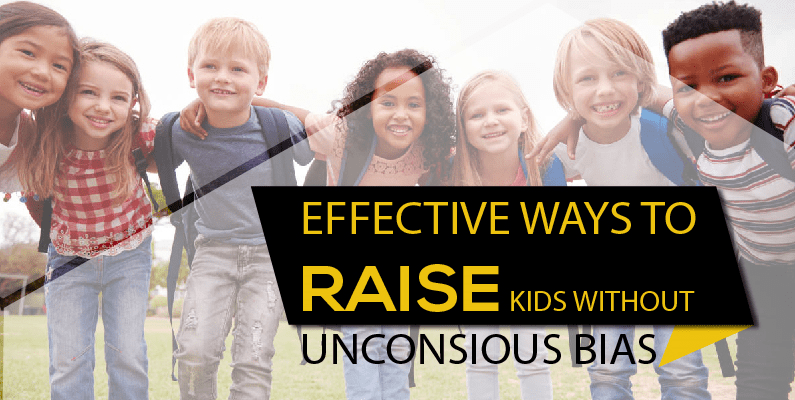 Imagine yourself at the street alone waiting for the bus. Suddenly, a man appeared with messy hair, pierced ears and eyebrows, hands full of tattoos, long beard, continuously spacing back and forth.

How will you react?  Or  What will be your first impression?

Maybe you will feel unsafe around him, thinking that he might harm you. But what if he is just waiting for the bus just like you but a little impatiently. Possibly you will feel safe and easy if the same man would be in his casual attire, nicely parted hair, shaved skin, and standing calmly.

Well! This feeling is natural for everyone, and you'll be relaxed after understanding the situation. But there, you are not aware of the fact that you are in the unconscious bias state that leads you to feel fear around that guy.

What is Unconscious Bias?

The term 'UNCONSCIOUS BIAS' is a type of stereotype perception or mindset an individual has for the other person, group, and community from outside their own conscious awareness.

We just assume that the person cannot do more physical work because he is overweight.

The cliché mindset of women cannot handle work and home at the same time.

These were unconscious bias examples that the society feeds in our mind. Every time when we meet someone, we made a quick opinion about that person or a situation we are in.

There are some types of unconscious bias that our mind processed.

Most people are attracted to physical beauty, and they judge people by their appearance. The above imaginary scenario at the start is a perfect example of it. Some people tend to consider that the well-groomed person is always humble and helpful, kind and sweet, but it is not the truth every time.

For example: The big shops consider Beautiful girls as the sale girls. Because they thought the beauty always has a brain and it can also provide an excellent profit to them. While there is a slight chance for girls who are not that much pretty.

It is the tendency to get along with the people who have the exact liking as us. It is easy to socialize with them. The main reason is that while hanging out with a person who is different from us in any term, we find it difficult to build bridges between our different diversity.

For example: you can talk and have fun with your friends and be yourself around them. But you may not want to hang out with the foreign student because you can't speak his language or because of many other different factors.

For example: The girl whom you just meet at your friend's party bragging about her expensive dress, while only she knows that she borrowed it for the night. In that case, you just imagined her as a rich, cool, and independent person.

We always thought that it does not matter what we are talking about in front of children because they can't understand us. But actually, they can. They mimic our behavior and carefully noticed each and every detail of our doing. Kid's brain works faster, and they are early adopters of our actions and words.

A study found out that the children can observe and able to differentiate from the age of 6 months.

Another research was conducted on 350 students aged between 5 to 12 white children. The result showed implicit pro-white bias when the images of both black and white children were exposed. That means they can differentiate from the early ages.

How to Raise a Child without Unconscious Biases?

Talk about Other Race, Gender and Ethnicity, etc

Parents make it taboo to talk about the topic related to racism or any other issue related to it. Having a talk is necessary for kids awareness. As a parent, the first part to aware the kid about the different groups is to talk with them about the matters and become their first spot to awareness.

Try to make sure they are listening and understanding. Read bedtime stories to them related to the other's cultures and traditions, watch movies or cartoons that touch this topic such as Zootopia, Finding Dori, etc.

Try to Fade Their Negative Thoughts

We are surrounded by media, and kids can believe anything that media shows. They are vulnerable. Show your kid the achievement of people from different groups, nationality and races, the other side of the picture that media shows. The negative thoughts and perceptions must have to be replaced by the positive ones, so don't leave the space blank; fill it with positivity. Inspired them by the success stories of people from different groups and races like Usain Bolt, Bob Marley, and others.

A recent study shows that how the researchers are bringing ideas for parents so they can take care of their child's behavior about unconscious bias and can fade their negative thoughts.

Confront Your Own Bias

Before catching up with your children, take a quick look at yourself. Do you have any friend who belongs to other group or race? The child learns from your action. The first thing you have to do is to confront your own bias. Make friends from different races. Build cross-friendships with other groups and races, and you will learn new things from them, and your child will learn too.

A study shows greater communication between parent's bias and children's bias between children who were highly identified with their parents than less identified children.

Do not let your kid stick to curriculum and books related to your own group; let the kid read about races and groups. School's syllabus book primarily focuses on the achievements of their own country heroes and majority holder group. It can be a reason to develop an unconscious bias for students.

Search online; there are millions of resources available. Teach them to your kids, diversify learning material and content that contain social power and justice. Recite them the books like not my idea, a kid's book about racism, each kindness, the other side, etc.

Encourage your child to challenge odd

Don't let your child be the bully who feels superior to every other. Give him courage and support to challenge the racist stereotype and break them. Interact with people of all races, communities, and ethnic groups.

If you belong to a white family, let him befriend with the black. Have a party at your house and invite all of his classmates and from neighborhood does not matter if they are rich or not, white or not. That is how you can encourage your child to break the odd.

Don't be the standoffish parent. Children ask some questions that can make you struck, and you can't understand how to answer. But shushing them down is not a solution. It makes them more curious, and perhaps they will ask the same question to someone who can fill out a kid's mind with gibberish stuff.

Evaluate their question and answer them calmly about the hot topic of racism and group differences. Bring self awareness in children about all the odds and even of the world of racism.

Keep Them Away from Bad Company

Peers or friends always have a massive impact on children. They do things together, play, and spend most of the time with each other. Even if your child is a good boy/girl, the company of a lousy friend can damage your child's mind, and he will do things under peer pressure.

There are several examples you can see in your surroundings of how a good child becomes the bad one because of his debauched friend circle. Successful kids are those who know who is good for them and who is not, and it will only happen you become your child's first best friend.

You went through it, but help your children to be a better person who does not create any judgmental thoughts just by meeting a person for the first time or by watching some fake and implanted information on the media. At times children don't even know why they hate the person who just belongs to a different country, or has a different skin color, or speaks a foreign language. Remove this distance and hate, and this can only happen when the parent starts to guide their child from the early stage of their life.  Say No To Unconscious bias !!!!

MORE BY AUTHOR
Stuck With Christmas Celebrations? Here Are Some Gifts, Deals & Décor Ideas
Best Halloween Sales And Deals For A Spooktacular Money Saviour Celebration
4th Of July Sale 2021 Is Happening Now: Check Out the Best Deals And Discounts
Dog Bite - Why Is It Increasing And What Parents Need To Know
Shopping Guide For May 2021 - What To Buy (And Not Buy)
RELATED BLOGS
Parenting Tips for Raising a Child with ADHD
How to Keep Your Romantic Life Healthy While Parenting?
How to Teach Your Child the Value of Money
MOST VIEWED BLOGS
Top 11 Luxury Cars You Must Buy In 2020
Implantation Bleeding and Cramping – Are they Symptoms of Pregnancy?
110 Halloween Facts and Myths You Never Knew About
What Is Animal Testing? | Facts | Pros & Cons | Alternatives
All About Layaway - Pros And Cons - The Stores With Best Layaway Plans
Tags