My Travel Tales: A Memorable Trip to Grand Canyon Wonderland

Once in a year, or twice if you can, pack your luggage and visit to a new place every time to enjoy the beauty of nature. This time travel to the world’s most glorious geological wonderland, Grand Canyon and have a venturous trip of your life. Read here to find more about the place. 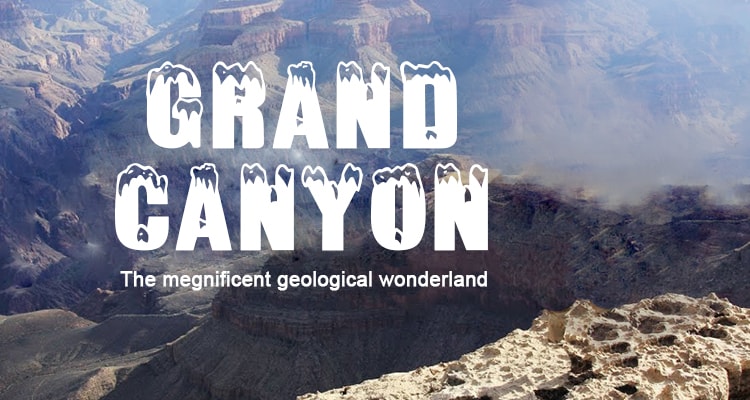 The Grand Canyon is a wondrous place, especially in the wintertime. There’s something special about snow-covered forests and icicles hanging from roofs that converts a park full of exceptional scenery into a whole new level of beauty and spirituality. On top of that, the national park is much less crowded in the winter, which makes it easier to get around and see the sights. That’s why the Grand Canyon was on my mind when I started thinking about a vacation.

I’d been working myself into the ground, 60 to 80 hours a week every week for a few years. I felt exhausted from my grueling schedule and desperately needed to get away from the madness for a while, to relax without the constant barrage of demands from work.

About a decade before, I’d visited the Grand Canyon in the dead of winter. I remembered the beauty of the ice and snow, the wonder of a snowstorm, and the spirituality of seeing deer, rabbits, and other animals come right up to my hotel room looking for food.

In late November 2007, I felt the urge to visit the canyon come over me again. The last time I went, I was alone. That was fun, but I thought it would be better to go with a friend and share the experience.

On a whim, I called up one of my very best friends, a professional dancer named Jannah. It didn’t take me long to talk her into going with me, especially after I assured her that my intentions were honorable.

I didn’t feel like driving like I had the last time I went, so I did some research and found there is a train that travels from a small town named Williams Arizona down into the canyon. I called them up to find out more, and the lovely lady on the phone explained that I could take the Amtrak from Union Station in Los Angeles, disembark at Williams, get on the train to the canyon, and then stay in a hotel in the village. Getting home consisted of reversing the trip.

I was elated because it seemed like taking the train would be more exciting and less stressful than trying to drive the whole trip. My friend and I would get there refreshed and ready to explore.

Making the arrangements was easy, and I scheduled the trip for the next week, December 27. Since I didn’t have to drive, I didn’t even look at the weather report. It seemed like it wouldn’t matter since I wouldn’t have to brave driving on icy roads and through snowstorms.

I didn’t expect the trip to be so quick, and we got to the railroad station, such as it was, three hours early. Did I say it was cold? It was below freezing, and there was an icy breeze. We sat there, shivering, talking and trying to stay warm until the train arrived.

The cool thing about Amtrak is you can get a sleeper car, which consists of two chairs and a table in the center. To sleep, the chairs fold down to form into a sleeping platform, and a second mattress folds down at a higher level to form a bunk bed. At the time, the cost of the sleeper car was about the same price as a hotel room for the night, so I felt it was a bargain. Since the trip was 18 hours long, it seemed like it would be an excellent way to get some rest before arriving.

The trip to the Grand Canyon on Amtrak was uneventful. The dining car was fantastic, and the dinner was delicious. I was impressed with the cleanliness and professionalism of Amtrak. Of course, it cost more than just driving, but it sure was easier and more fun.

Once we arrived, the train unloaded us onto a platform in 5° weather. Did I say it was cold in California? That was nothing compared to how cold it was in the Grand Canyon. Fortunately, they shuffled us into a van and drove us to the Williams hotel, where we quickly warmed up. We had some time to hang around before the train ride to the canyon, so we watched the various performances that was put on by entertainers all over the town.

After lunch, we got on the steam train and went to the luxury car, which was far better than first class. The trip took about two hours, and during that time, the train was robbed. Several cowboys on horseback caught up to the train, got on board, and went through each compartment, interacting with the passengers. It was quite a show, and it made the trip more fun.

Once we got down to the canyon, my friend and I got some food, which was standard cafeteria fair, went to the hotel, checked in, and then got on a bus for a tour. We enjoyed the sunset, and I realized how quiet the canyon village was after nightfall. You could hear a pin drop.

The next day we got up early. Did I mention my friend is a dancer? She wanted me to get some pictures of her dancing on the rim of the canyon, so she got dressed in her outfit, and we walked over to the edge of the canyon so that she could perform.

For the next two hours, Jannah danced 2 feet from a several-thousand-foot drop. It was cold, lower than freezing, but she didn’t feel it because the movement kept her warm. A crowd gathered and watched her do her dancing to rock ‘n’ roll music.

We spent the next few days taking tours, hiking, photographing, and so on. Jannah only did that one performance. It seemed that once she got it out of her system, she was done with it.

It started to rain on the second day. By the middle of the afternoon, it was pouring water from the skies. We spent most of that day indoors, shopping, eating, and trying to stay dry and warm.

The trip back from the canyon was mostly uneventful. I reserved the dome car for the return trip to Williams, which is kind of like the luxury car only passengers can see in all directions from a dome on top of the train. We arrived back in Williams in the early afternoon, ate some food (which was excellent), bought a few souvenirs, and then jumped on the Amtrak to return to California.

Above all, it was a fantastic trip. It was good fun with a good friend, and the Amtrak was a brilliant way to travel because we were more relaxed and had time to talk. The train down to the canyon from Williams is phenomenal, and the employees go to great lengths to keep the passengers entertained and happy.

My advice is to take your time, plan out your trip regardless of how you get there and relax and enjoy yourself.

Do take pictures and videos but do put down the smartphones and digital cameras for the most part and just enjoy yourself. Breathe the clean air, look at the animals and plants, and enjoy some of the best scenery in the world.

MORE BY AUTHOR
Black Friday Savings - Deals, Tips And Unlimited Discounts
Get 7 Days A Week Shopping Sales Online
Make Your Sleep More Comfortable With Availing Plushbeds Discount Code
Online Shopping Tips & Hacks To Save Money Live Better
Best Plus Size Fashion Outfits For Curvy Women
RELATED BLOGS
19 Tips You Need To Know Before Visiting China
Camping Essentials For Fido
6 Fantastic Winter Vacation Spots For Families To Have A Gala Time
14 Tips Revealed! How To Get Cheap Flights To Anywhere In The World
12 Best Travel Tips To Europe
MOST VIEWED BLOGS
Implantation Bleeding and Cramping – Are they Symptoms of Pregnancy?
Top 11 Luxury Cars You Must Buy In 2020
110 Halloween Facts and Myths You Never Knew About
What Is Animal Testing? | Facts | Pros & Cons | Alternatives
All About Layaway - Pros And Cons - The Stores With Best Layaway Plans
Tags