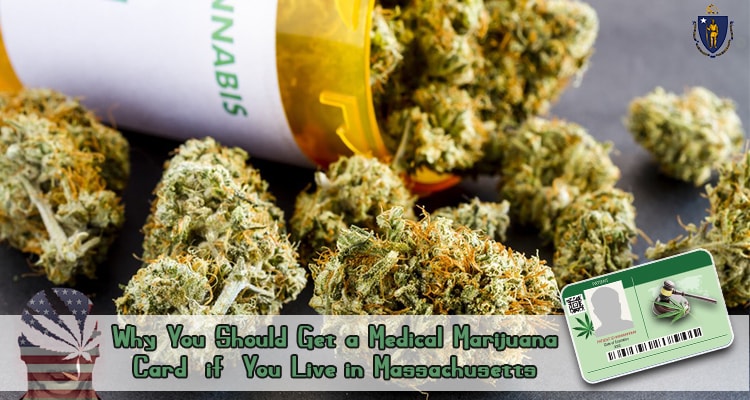 After the legalization of marijuana in Massachusetts, many people forget to have a medical marijuana card. Because they think they can buy weed easily, so they don’t need it anymore.

But, they are missing those amazing perks that only medical marijuana cardholders can enjoy, especially in Massachusetts. If you desire to be among those people, feel free to read on.

That’s because medical marijuana contains a higher cannabidiol content or CBD, as its famously known for. It also has THC, but it’s usually grown and concentrated on CBD content. This CBD doesn’t really give you that high but patrons do claim that it has medical benefits – which is why it’s recommended as a treatment for various diseases like seizures.

The key elements of both recreational and medical marijuana are what set them apart from each other. That is their main difference, and that’s why the other one requires users to have a card with them for purchases. Sounds pretty clear, eh?

As discussed earlier, many people are already thinking of ditching their cards – or maybe they already have. But this could be a really disastrous decision given that there are just countless of benefits you’d miss when you throw away yours.

The first benefit you get from being a cardholder is the tax you will avoid when making big purchases. Yes, and a whole lot of it. Recreational marijuana gets taxed at a rate of 17 to 20 per cent, that’s really huge. Comparing to a tax-free transaction for medical marijuana, you can save a lot.

Don’t worry about the $200 annual fee; you’ll be saving more than that if you buy at medical dispensaries. In the world today, it’s not so much about how much you spend, it’s about the return of investment you’ll get in the long run.

Now, recreational marijuana holders might boast about different kinds of things, but you can definitely boast about your edible haul. Medical marijuana users can have all the edibles they want - for as long as they can afford it, of course.

In the state, there’s a limit to how many edibles you can purchase and the difference is vast. You can only buy edibles that contain just about 100mg of THC. The problem with edibles is that they contain lots of it. No worries for cardholders though, you can buy a lot of those without a limit on the content. You can even have access to all the edibles you want. It’s Convenient; don’t you think?

It’s required for dispensaries to have separate lines for medical patients. Ever since the state has legalized recreational weed, people have been racing to the stores and falling in line to get their hands on something that used to be illegal.

For medical patients who need it for treatment, this can be really inconveniencing. That’s why, with a card, you get special treatment. You have a separate line that won’t just grant you valuable time to ask your budtender but to also save you from the long waiting lines that other people need to endure.

Just remember, you always need to bring your medical card along with valid ID to prove that you’re old enough to enjoy these benefits. Otherwise, you’re just going to be like everybody else.

One of the many great things Massachusetts dispensaries did for medical marijuana users is that they made delivery services a thing. Medical marijuana cardholders can just freely opt to have their products delivered right at their doorstep.

Now, that’s genuinely something recreational users can’t have. Just make sure to tip the delivery guy because a lot of cardholders might only have opted for the same option you did.

With all the benefits enumerated, it’s clear that ditching your card renewal won’t be a good choice. You seriously won’t bail on savings, special treatment, or delivery services. Right? Renew your medical marijuana card and enjoy the benefits because not everyone can.

MORE BY AUTHOR
Black Friday Savings - Deals, Tips And Unlimited Discounts
Get 7 Days A Week Shopping Sales Online
Make Your Sleep More Comfortable With Availing Plushbeds Discount Code
8 Mistakes Couples Make With Their Wedding Gift Money
Online Shopping Tips & Hacks To Save Money Live Better
RELATED BLOGS
The Chronology Of E-Cigarettes: Are They Beneficial For Your Health?
7 Healthy Ways To Detox Your Body Without Starving
Scientifically Studied Ways To Decrease Your Anxiety
My Daily Facial Skincare Routine
A Comprehensive Guide To The Timeline of HIV
MOST VIEWED BLOGS
Top 11 Luxury Cars You Must Buy In 2020
Implantation Bleeding and Cramping – Are they Symptoms of Pregnancy?
110 Halloween Facts and Myths You Never Knew About
What Is Animal Testing? | Facts | Pros & Cons | Alternatives
All About Layaway - Pros And Cons - The Stores With Best Layaway Plans
Tags